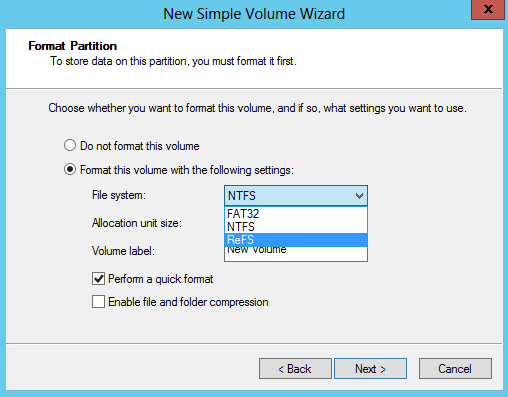 Built on the foundation of the NTFS file system, the ReFS file system is the next-generation file system that has been architected and designed to work in the simplest or most complex storage environments. Microsoft has adopted and integrated the best features from NTFS (including BitLocker, Access-Control lists) and while degrading outdated features that were no longer in use (including file-named stream and object IDs).

The ReFS file system is designed to provide advanced-level protection against data corruption by implementing Meta-data and file-level integrity checksums. It also has the ability to automatically resolve most file-system related issues as they arise. Suffice to say, It’s bundled with new features and capabilities that will help you become a more efficient technology provider.

As a technology provider, one of your biggest concerns is data loss and it would impact each of your clients. Microsoft’s improvements in data resiliency reduce the probability that one of your clients will have to depend on their backup data to continue operating.

The ReFS file system ensures data resiliency through various processes and architectural practices by securing file systems, meta data, and enabling users data protection on a per-volume, per-directory and per-file basis. It utilizes B+ tree page on all data structures and meta data. The 64-bit checksum is stored in a different location than the location of the page itself, which enables the detection of disk corruption, misdirected writes, and bit rot.

Microsoft’s Resilient File System also includes an Integrity Stream feature that enables checksums of the contents of each individual file and the recording of file changes in a separate location. The checksum process works in parallel with the file-writing process so that, even if an interruption occurs in between, there is a verifiable version of the file available. For server administrators who need to quickly access data in the event of technical problem, this can be the difference between minutes and hours of work.

Even if the file data or Meta data becomes corrupt, a file can be deleted without taking the whole volume offline for maintenance, and then it can be restored from the backup. The ReFS file system built-in resiliency feature eliminates the administrator’s need to periodically run error-checking tools such as CHKDSK.

Further, the ReFS file system can be integrated with Storage Spaces to detect all data-corruption events. In case of corruption occurring on a Storage Space volume, the file system uses checksum validation to identify the correct copy of a data object or file and then repairs or replaces it with a valid copy.

In short, the data resiliency improvements that Microsoft included in ReFS are a fantastic way for server administrators, who are still using Windows Server 2003 or 2008, to offer a the highest quality of service.

ReFS’ ability to support storing large amounts of data was designed with future data requirements in mind. It supports up to 16 Exabyte of data storage, which can be scaled to 256 Zetabytes. If you would like to learn more about the specific data limits that it offers, check out Microsoft’s Windows Server blog that describes the different limits of data and file storage within the new file system.

ReFS file system design goals mainly address handling, removing and dealing with data corruption throughout the storage medium. Bit rot is a form of data corruption that is harder to detect as it develops over time and is usually visible in disk locations or directories that are not frequently accessed by users and/or applications.

The ReFS file system manages and eliminates bit rots through a technique known as “scrubbing.” Scrubbing works by searching, reading and validating each copy of data object with a checksums. If there is a data mismatch the “good copy” immediately replaces the corrupt copy. In addition, developers can use the FILE_ATTRIBUTE_NO_SCRUB_DATA attribute to specify those items whose integrity is maintained by third-party applications.

With the bundle of new features, including enhanced protection against data corruption and scalability, ReFS is poised to be the next-generation file system. It can ensure the integrity your clients’ data and offer the flexibly to scale any file-system storage and management challenge that your clients pose.

Prior to founding Awesome Cloud Services, Jess was an Electrical Engineer with Motorola. He was a member of a research team that developed next generation digital communications systems. In his spare time, you’ll likely find him at the grill or in front of his smoker getting ready for some lip-smacking ribs to enjoy with his wife and two kids.